Crackin’ Up with Dr. Kris: Where Therapy Meets Comedy

Home » Crackin’ Up with Dr. Kris: Where Therapy Meets Comedy

If you can’t crack up, you’ll crack!

If laughter is the best medicine, join Dr. Kris and special guests for this one of a kind therapy session meets comedy show experience. Sponsored by weighted blankets and years of therapy. Not a substitute for medical advice.

A portion of the proceeds will be devoted to the National Alliance on Mental Illness (NAMI) and AAKOMA Project.

Signed copies of Dr. Kris’s latest book Worth the Risk: How to Microdose Bravery to Grow Resilience, Connect More, and Offer Yourself to the World will be given to the first 100 audience members! Over the years Nate has developed anxiety and OCD but he doesn’t let that slow him down. Instead he uses his anxiety and OCD like a tool to create quirky little one liners that he puts onto note cards. He is excited to share his out of the box thinking with you. Nate is usually one of the funniest comics in the room. Of course, he’s usually alone in his room. @Nate_Fillers_Comedy 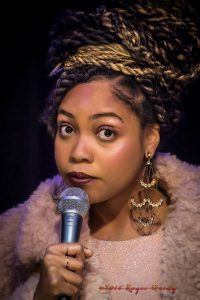 With razor sharp wit and a charm once described as “ineffable,” Tooky (rhymes with cookie) Kavanagh speaks her mind with honesty, charisma, and edge. After just a few years on the scene, Tooky has already performed in New York, Denver, and all over New England.

She regularly opens for Myq Kaplan when he visits Boston, has opened for Eugene Mirman, Atsuko Okatsuka, Matteo Lane, Bravo TV star Hannah Berner, performed as part of a Multiple Sclerosis benefit show with Dr. Jonathan Katz, and performed on lineups alongside comedy notables Emma Willmann, Gary Gulman, and Alingon Mitra, to name a few. In March of 2018 and 2019, she was selected to perform on the Comedy Central UP NEXT audition showcase, and in both April 2018 and February 2019, she was selected to audition for the prestigious Montreal Just For Laughs festival. She was selected to be a featured comedian at the 2020 Boston Calling festival (but we all know what happened in 2020), yet had already bounced back in 2021 by opening for a few major national acts, headlining a full weekend at Boston’s legendary Nick’s Comedy stop, and headlining the Ruby Room at the famed Shaskeen Pub.

She co-hosts the Loud Women podcast with friend and producer Marissa Emmanuele, hosts The Rehash on 2MBstudios, and co hosts NORM!: The Cheers Podcast on Facebook Live.

As an actor (check out her IMDB, The Boston Globe, and Vanyaland) she is a founding cast member of the indie sketch group Suzzy, co-stars alongside some of Boston’s finest comedians in Salesmen (available now on Prime Video), was a regular cast member of the “Redo Crew” for Starstruck: Close Encounters of the Awkward Kind, starred as The Humbled Hobo in a 48 Hour Film Project film, is a featured character in the short film Woman Unknown, and was a recurring character in the web series, Paid For By.

She can be seen regularly at Boston-based institutions such as The Comedy Studio, ImprovBoston, and Laugh Boston. Also, she’s the one who described her own charm as “ineffable,” but it’s still true! In 2015, she was named one of the Comedy Studio’s Comics in Residence and opened for Maria Bamford a the Wilbur. @EmilyRuskowski